SOCIETIES TRAPPED IN THE PAST 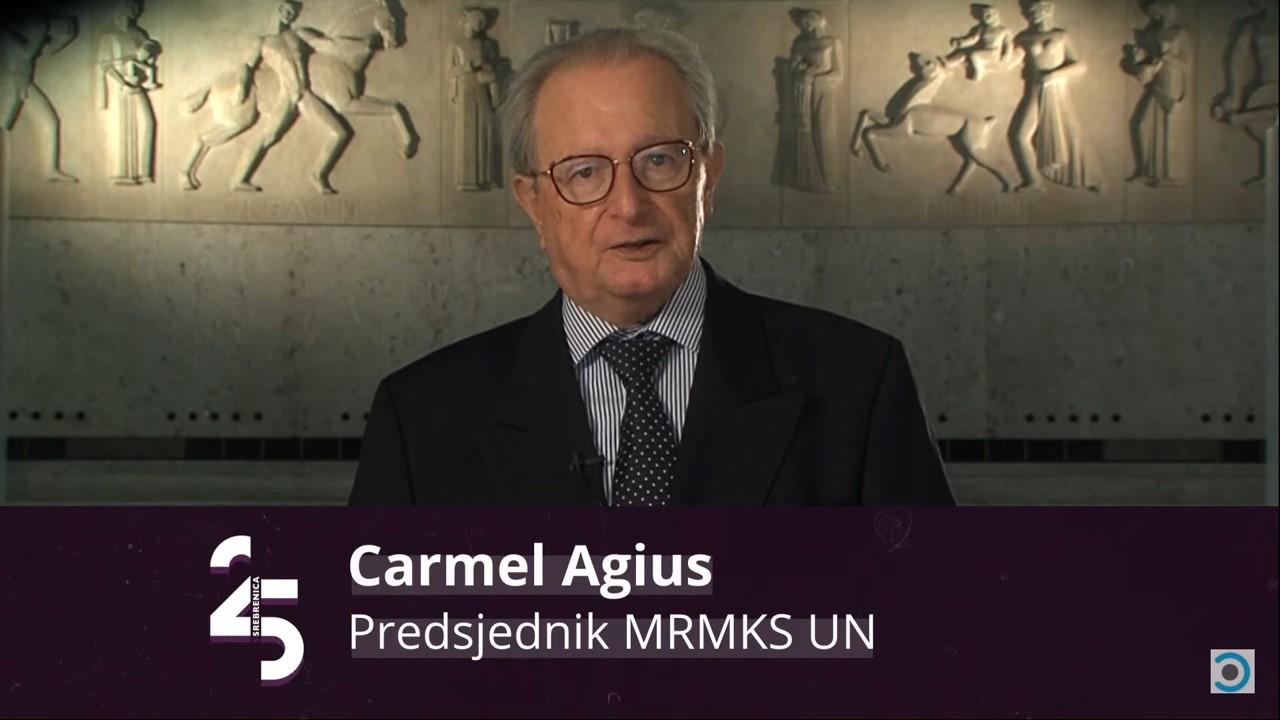 It is of particular concern that crimes continue to be vehemently denied, and convicted war criminals continue to be celebrated. Such activity only widens the gap between people of different ethnicities and keeps whole societies trapped in the past. In this context, the engagement of civil society organizations is of utmost importance, said judge Carmel Agius, President of the International Residual Mechanism for Criminal Tribunals (IRMCT), in his message at the opening of the campaign called "Srebrenica 25: Together Against the Denial Virus" at the SENSE Center in Pula

I am very pleased to join you today for the launch of the “Srebrenica 25: Together against the Virus of Denial” campaign, organized by the SENSE Center for Transitional Justice and its regional partners, as well as the opening of the impressive “Srebrenica Collection”.

Ladies and gentlemen, history has shown that the renewal of a society devastated by conflict depends largely on its ability to face the difficult legacy of its past. To acknowledge the experiences of those who suffered. To confront the truth. These processes, even if long and painful, carry the potential to revitalize and reconcile communities and entire countries, and to strengthen the rule of law.

Countless violations of international humanitarian law were committed in the former Yugoslavia during the conflicts of the 1990s, when more than a hundred thousand people were killed, millions were displaced and expelled from their homes, and precious cultural heritage was systematically destroyed. The ongoing spiral of evil culminated in Srebrenica 25 years ago, in July 1995, when genocide was committed against almost 8,000 Bosnian Muslim men and boys.

The ICTY and the Mechanism have established time and again in their judgements that this genocide occurred, thus providing a legal epilogue to the horrors that indelibly marked and alienated communities in the region. Through their findings, and by establishing the individual criminal responsibility of those involved, an important element of justice has been delivered. And an undeniable historical record now exists.

Thanks to the work of the ICTY and the Mechanism, present and future generations are left with a rich legal heritage and an extraordinary judicial archive. This encompasses not only judgements and decisions, but also millions of pages of documentary evidence, thousands of hours of audio and video materials, and numerous artefacts. These unique resources can serve as an immensely valuable tool for communities willing to come to terms with the past.

Yet, while the judicial dimension is necessary, on its own it is insufficient for successful processes of post-conflict recovery. Moreover, the potential to use justice mechanisms to understand, learn from, and ultimately overcome the recent past, does not lie in The Hague. Rather, it lies firmly with the citizens of the countries of the former Yugoslavia. Only they can carry the processes of transitional justice forward, to build better, stronger, more inclusive societies.

Unfortunately, these processes are often resisted. Significant challenges exist and indeed are deliberately created, to distort the truth. It is of particular concern that crimes continue to be vehemently denied, and convicted war criminals continue to be celebrated. Such activity only widens the gap between people of different ethnicities and keeps whole societies trapped in the past.

In this context, the engagement of civil society organizations – such as the SENSE Center for Transitional Justice and its partners from Bosnia and Herzegovina, Croatia, and Serbia – is of utmost importance. Your initiatives are bringing the law closer to true justice in the minds of members of your communities. They contribute to constructive dialogue and a better understanding of the region’s shared history. I am pleased that, in your work throughout these years, you have relied on the rich legacies of both the ICTY and the Mechanism. In doing so, you have created a truly wonderful resource of informational and educational products.

An excellent example of this is undoubtedly the "Srebrenica Collection". This unique multimedia exhibition presents the relevant work of the ICTY in an engaging and powerful manner, making the legal discourse more easily understandable for a broader audience, while starkly reminding us of the terrible events that took place 25 years ago. Indeed, it is difficult for anyone to remain indifferent after interacting with the compelling "Srebrenica Collection".

I wish the SENSE Center for Transitional Justice and its partners every success with this ambitious project, and with the Srebrenica 25 campaign more broadly. I am convinced that future generations will greatly appreciate your ongoing work. They will be thankful – as I am – that you refused to be passive during these challenging times, but took action and invested your knowledge and efforts towards re-building and re-connecting communities throughout the former Yugoslavia.