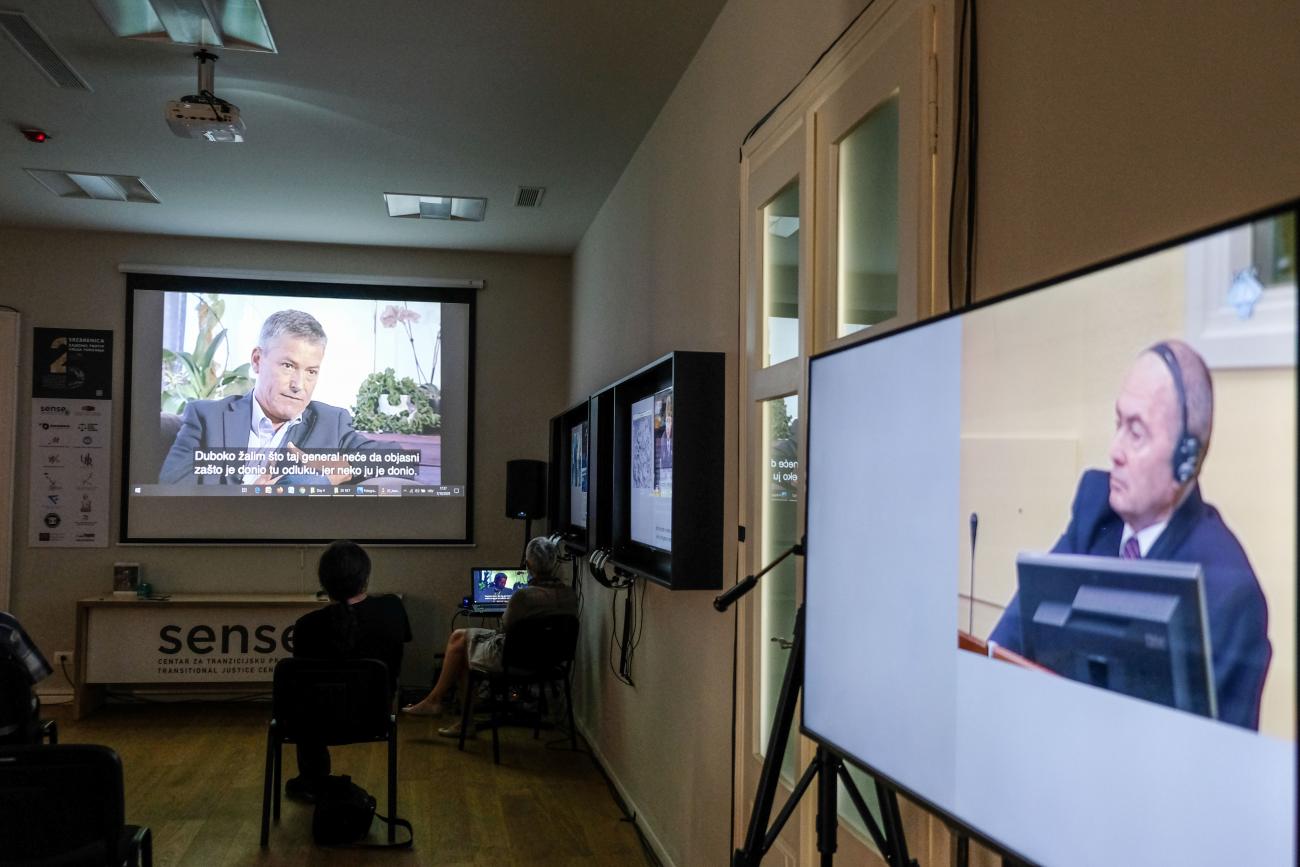 A video summary of the testimonies of former Bosnian Serb soldiers, policemen and officials from the Srebrenica area was broadcast at the SENSE Center on the fourth day of the campaign. Those witnesses for the most part testified when they were compelled by subpoena. That video was followed by recorded statements of Jean-Rene Ruez, head of the Srebrenica investigation, Mark Harmon, prosecutor, and Stefanie Frease, investigator

A video entitled "Unwilling Witnesses" outlines the testimonies of former Bosnian Serb soldiers, policemen and officials from the civilian authorities in the Srebrenica area, for the most part came to The Hague to testify when they were compelled to do so by subpoena.

Once in court, bound by the solemn declaration to speak the truth, they had to tell the judges what they had done, seen or heard as the events in Srebrenica unfolded.

The video is a segment of the interactive narrative "Srebrenica: Genocide in Eight Acts", produced by SENSE Transitional Justice Center.

It was followed by receorded statements of the Tribunal's investigators and prosecutors.

Head of the ICTY Srebrenica investigation Jean-Rene Ruez said that all the investigators and prosecutors believed that Ratko Mladić was the main person responsible for the mass killings in the Srebrenica area because no one else could have ordered such extensive and  demanding operations. Ruez pointed out that  it was a final act of the war in the former Yugoslavia and as such requires an explanation of its own, but the person who should give that explanation, that is Ratko Mladić, is unwilling to go through that process.

Prosecutor Mark Harmon explained in his statement that the investigators and prosecutors had interviewed a hundred or so Bosnian Serb Army people who simply lied that they did know anything. "I know there was lots of pressure on them but one had a moral responsibility in the face of crimes like that" to testify, said Harmon. He recalls only one Serb who stepped froward to reveal the location of certain grave sites even though the Srebrenica crimes were done public.

Denial of a crime "sets back society, it puts us in concrete boots that don't allow us to move forward", said Stefanie Frease, who worked for Ruez's investigative team. She added that she had a lot of respect for people who plead guilty because in acknowledging what had happened we can move forward".

The campaign "Srebrenica 25: Together Against the Denial Virus" closes on Saturday with the broadcast of messages from the president and the chief prosecutor of the IRMCT Carmel Agius and Serge Brammertz, messages from the victims and witnesses of genocide and a documentary "Beyond Reasonable Doubt".