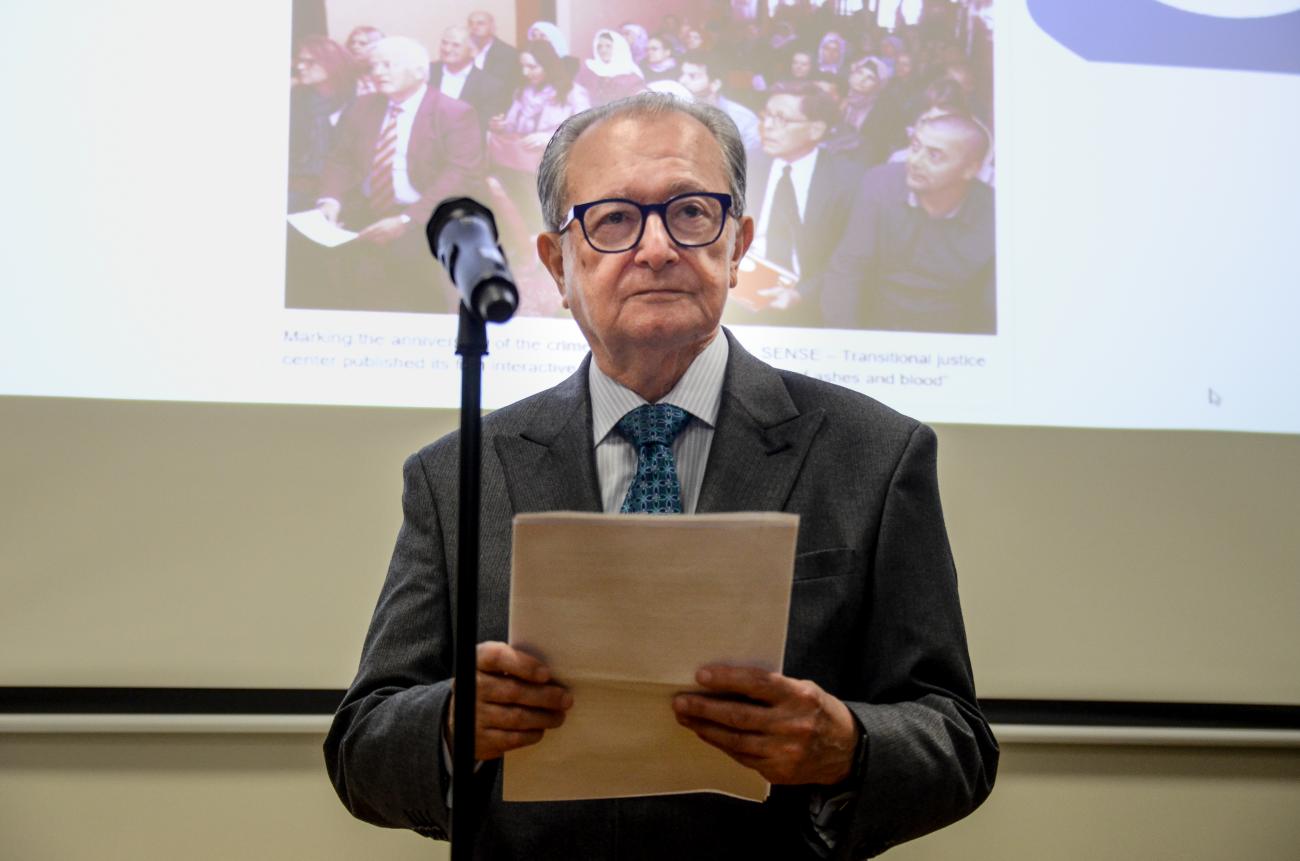 It was at the ICTY that I came to know and to admire Mr Mirko Klarin, Head of what was then the SENSE news Agency, and now Director of the SENSE Transitional Justice Center. Two years ago, Mirko invited me to open a wonderful exhibition called ―Targeting Monuments – Targeting History and Memory‖ at the History Museum of Bosnia & Herzegovina, and in fact I opened the same exhibition last year in The Hague. It was my honour then, just as it is my deep honour now, to be able to participate in such a meaningful event. This time, I feel privileged to be invited to open an important and powerful new exhibition here at the SENSE Transitional Justice Center in Pula, called ―48 Hours of Ashes and Blood‖, which deals with the horrific events that occurred in Ahmići, Central Bosnia, just over 26 years ago.

Before I speak about the exhibition, however, let me say a few words regarding Mirko and his work. On 25 May 1993, the international community embarked on an historic mission to pursue a new definition of justice through creating the ICTY—one that reflected not only our condemnation of the crimes committed, but our determination not to stand idly by in the face of grave atrocities. The ICTY was given an unprecedented mandate to investigate crimes committed in the course of the conflicts in the Balkans since 1991, and to bring to justice those mainly responsible for perpetrating these heinous crimes; an enormous task which was the first serious attempt since the Nuremberg and Tokyo trials to combat impunity and possibly eradicate it.

SENSE was the only news agency in the world to document the implementation of this mandate and follow the ICTY’s cases from the very beginning, right up until the ICTY’s closure, and Mirko was at the helm all the way through. His contribution, and that of SENSE, to truth, to the legacy of the ICTY and therefore to the work of its successor institution, the Mechanism, has been enormous. And it continues to this day through the activities and exhibitions of what is now called the SENSE Transitional Justice Center. Mirko, the work you and your team have done is outstanding, and today's exhibition is one further example of how significant your contribution is and has been. For this, I express my sincerest gratitude.

Dear friends, we are however here today not to discuss our own achievements, but rather to acknowledge and be reminded of the horrors of war and the tragedy of human loss; in particular, the appalling loss suffered by the inhabitants of the quiet village of Ahmići over a quarter of a century ago. On 16 April 1993, in a mere matter of hours, over 100 inhabitants of that village, including women and children, were killed, approximately 24 were wounded, and over 160 houses and two mosques were destroyed by Bosnian Croatian military forces: the HVO and the special units of the Croatian Military Police, the so-called ―Jokers‖.1

The ICTY dealt with these crimes in a number of important cases— Prosecutor v. Kupreškić et al., Prosecutor v. Blaškić, Prosecutor v. Kordić & Čerkez, and Prosecutor v. Bralo,—holding to account rank and file officers and high-level commanders of the Bosnian Croatian military forces alike. Some of those indicted were ultimately acquitted, while others were convicted and sentenced by the ICTY for the crimes in Ahmići, including Dario Kordić, who was sentenced to 25 years of imprisonment, Miroslav Bralo, sentenced to 20 years, and Vladimir Santić, sentenced to 18 years. In addition, the ICTY indicted Paško Ljubičić, the highest-ranking member of the HVO Military Police, whose case was later transferred to Bosnia & Herzegovina, where Ljubičić was sentenced to 10 years of imprisonment. This body of jurisprudence establishes an important historical record, and that the victims of these attacks, Muslim civilians, were deliberately persecuted in order to spread terror and ―ethnically cleanse‖ Ahmići of its Muslim population.2 The cases also establish that the Ahmići massacre took place within the context of a broader series of attacks across Lašva Valley, where over a number of months, the world laid witness to a series of persecutory violence against homes, lives, and the very fabric of our humanity.3

Against this backdrop, the present exhibition is exceptionally relevant. This exhibition, which is also being held at Ahmići Primary School and in Sarajevo through SENSE’s joint efforts with the History Museum of Bosnia & Herzegovina, is a testament to the progress made since the 1990s. We look back together at a time of conflict and disunity, through an exhibition born out of collaboration and dialogue. In doing so, we remember these crimes and, what is more, we honour the victims.

The exhibition features some fifty photographs taken on 16 April 1993 and in the days thereafter, by Mr Giles Penfound—former photographer of the British Battalion, stationed back then in Vitez as part of the United Nations Protection Force—who generously shared his collection with SENSE to pay his respects to the victims and survivors of the events. The photos depict, in a way words never could, this dark chapter in our history and the enormous suffering it caused.

It is in this regard that the ICTY’s—and now the Mechanism’s—functions are not solely adjudicatory, but also didactic. The justice that the international community seeks to provide by establishing such courts and tribunals, is thus not aimed solely at prosecuting and punishing those most responsible for heinous crimes; it serves also to establish the facts so that revisionism and denial can be defeated, to send out a loud and clear message that impunity will no longer be tolerated, and to give a voice to victims and assure them that what has happened is condemned by the world; today, and for generations to come.

Significantly, the exhibition I have been honoured to inaugurate today sends out the same message: it reminds us that we must never forget, and never repeat, what happened during those 48 hours of ashes and blood 26 years ago. I therefore commend the SENSE Transitional Justice Center for taking this important initiative, which constitutes a timely and moving illustration of human cruelty on the one hand, and human devastation and suffering on the other.

Justice is often seen in terms of verdicts. In truth, it begins long before, when the evidence is collected, more often than not under very difficult conditions, and when the victims tell their stories. It continues when those stories become part of the historical record, when the court renders its verdict, and when the sentence is served. This exhibition traces an important part of that journey.

My thoughts today are with all those who lost their lives, homes, and property during those awful hours, with those who survived the horrors and will live the rest of their lives haunted by terrible memories, and with their families who have suffered so very much. May God give you all the strength you require. Through this SENSE exhibition, you will be remembered, and your stories will be preserved.

I thank you all.