In the past two months, the Montenegrin public television (TVCG) has shown seven documentaries created and produced by SENSE News Agency between 2001 and 2017, when the agency actively covered the work of the Yugoslav War Crimes Tribunal. The serial of documentaries was named "Dealing with the Past." 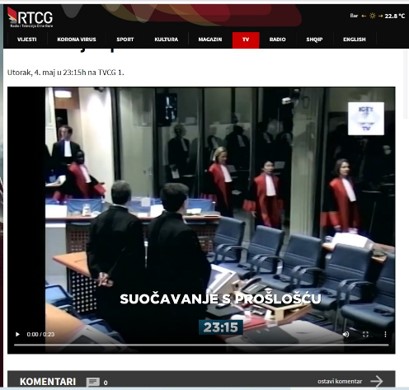 Đurđić. As he explained in his request to SENSE - Transitional Justice Center (the successor of SENSE News Agency and  copyrights holder), "the Montenegrin society sorely needs to face the past, considering that some of the top officials in the newly formed government have been denying the genocide in Srebrenica and questioning the objectivity of the Hague Tribunal, while at the same time the glorification of Radovan Karadžić and Ratko Mladić has become politically acceptable and desirable."

Đurđić says these tendencies go in parallel with the denial of Montenegrin political and national identity and independence and with the advancement of a Greater Serbia idea under a new banner - "Serbian world".

The reactions in Montenegro to "Dealing with the past"serial have been nequivocally demonstrated its rejection of  the ideology of 'blood and soil'. On the other hand, the new government is, generally speaking, of opinion that the public television should not advance the topics that divide the Montenegrin society, such as the conflicts of the 1990s, and should focus on the important current issues, instead.

In his communication with the SENSE Center after the showing of the serial, Đurić noted that "such benevolent attitude of the new government towards the explicit revision of the recent and distant pasts has divided the Montenegrin society more deeply than any documentary, SENSE's or anybody else's, that the TVCG had shown over the years. The TVCG regularly covered issues related to war and war crimes, starting from the shameful attack on Dubrovnik, to the surrender of refugees and kidnapping of passengers at Štrpci station, to crimes at Bukovica and Srebrenica."

Admitting the importance of covering practical current issues, "the editorial team of the TVCG points out that it will not cease reminding the public that crimes cannot be relativized, war criminals turned into heroes and executioners into victims".

Some of the Montenegrin civil society organizations expressed their approval for the "Dealing with the past" serial. Tea Gorjanc Prelević, executive director of the Podgorica based Action for Human Rights, pointed out that "accurate reporting on painful past serves the public interest" and that "the broadcast of documentaries made by SENSE on the TVCG was a very good example of that." She said that unresolved issues of the past present "a burden for Montenegro's present and future."

"The Montenegrin public is still insufficiently informed about the important achievements of the Hague Tribunal in establishing facts about war crimes - facts that are interpreted incorrectly and in populist ways even by the top officials. The documentaries produced by SENSE are, therefore, very valuable as a succinct, accurate and effective source of information for the public which does not read judgements", Gorjanc Prelević concluded.